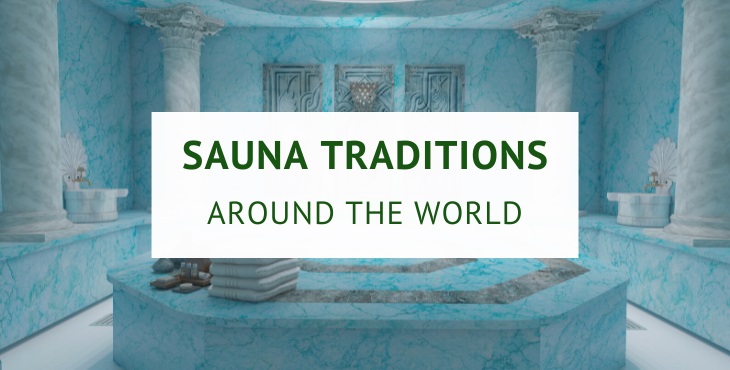 But there are countries and regions that have developed their very own sauna and spa traditions, embedded in their cultures. Let’s go through some of these traditions around the world.

In no particular order, here are 5 very different international sauna and spa traditions.

The Finnish sauna plays a crucial part in Finnish culture with on average almost one sauna per household. It is commonly believed that Finnish saunas, or rooms that resemble modern-day saunas, have been around for thousands of years.

The modern-day Finnish sauna very much resembles what most people think a sauna is. It’s typically a room, or separate building, with wooden walls and a wooden ceiling. A stove, kiuas in Finnish, is used to heat up the room.

Water is used to regulate humidity and temperature in the sauna. The sudden wave of steam that is generated by pouring water on the rocks is a phenomenon called löyly in Finnish language.

What has made the sauna so popular in Finland is that it allows people to escape the cold weather, if only temporarily. Finland, unsurprisingly, has also always had a large supply of wood which can be used to not only warm up saunas but also to build them.

Nudity in a Finnish sauna is very common. While a small towel is acceptable, being naked in a sauna in Finland is essentially the norm.

The Russian banya has been an important part of Russian culture for many centuries. Banya is essentially the Russian version of a traditional sauna or steam room, although the word can also refer to bath house.

Just like a Finnish sauna, a traditional Russian sauna is a wood-fired, dry sauna. A stove with sauna rocks is used to warm up and humidify the room.

When it’s nice and warm in the steam room and everyone is sweating, a venik is used to clean and massage the body.

A venik is a bunch of soft tree branches, dried in winter and fresh in summer. The venik is used to gently “beat” the body, from head to toe.

A Turkish Hammam, also known as a Turkish Bath or Hamam, is a Middle Eastern type of public bathing, cleansing and relaxing. It has been strongly embedded in Turkish and Islamic culture for many centuries.

The first step is to warm up the body before the cleansing process starts. The second step involves washing and cleansing in a warm room, while lying on a flat surface. The last step involves cooling off in a room with a much lower temperature.

This may surprise some, but Iceland has quite a strong outdoor pool culture. With so much volcanic activity going on in this small country, the mineral rich water in these pools are naturally heated.

These natural hot springs are popular with locals as well as with tourists. One of the most famous ones is the Blue Lagoon, a beautiful geothermal spa with a large outdoor lagoon, located close to Reykjavvik, Iceland’s capitol.

Some Icelandic spas also have massage rooms, saunas and restaurants.

Cleaning the body is an important duty for those who serve Buddha. As such, Japan has always had a specific bathing culture that still exists today.

A traditional Japanese Sento is a temple style bath house used for public bathing and socializing.

Once you’ve paid the fee to enter the Sento, you take off your clothes and put them in a locker. You then need to wash your body using one of the available faucets, before you can enter the warm bath where you can relax with your fellow bathers.

Depending on the Sento you visit, there may also be a massage room and a sauna to complement the experience.

The above sauna and spa traditions are very specific and unique to their respective countries. Most western countries, where saunas and spas are popular, are similar to the the Finnish sauna traditions, wheres in most Arabic countries, the hammam experience is more common.

Saunas in Scandinavian countries, and also in Russia and some eastern European countries, tend to have the highest temperatures. Beating each other with wet branches is also common in those countries, as a way of cleaning the skin.

Generally speaking, in the rest of Europe, sauna culture is less intense and more moderate. Temperatures are typically a bit lower and nudity is not very common.

Sauna culture in the USA is very similar, with reasonable temperatures, no nudity and lots of socializing. The sauna is not typically a pastime in itself, it’s more of an add-on to, for example, a gym session.

Saunas in the African continent are not hugely popular and, not surprisingly, typically have lower temperatures.

Sauna Samurai is your online guide to the beautiful world of saunas and steam rooms. Discover the goodness of the sauna lifestyle.