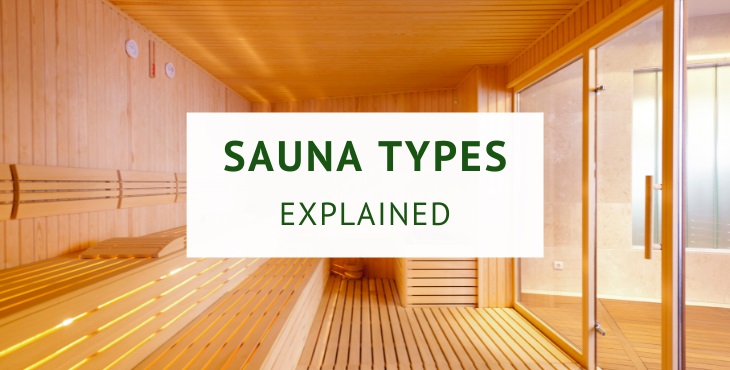 Saunas have evolved enormously since the first heated room experiences were documented centuries ago in Northern Europe, Russia, and the Roman Empire.

Today, we can choose between several different types of saunas, from traditional wood-burning saunas to modern steam rooms that we can often find in gyms and spas.

All of these sauna types offer different experiences in regards to heat, humidity, maintenance, and benefits, and some are more easily accessible than others.

In this article, I have outlined the seven most common types of saunas, including information on their origins and how they function, so you can determine which is best for your needs.

The most common type of sauna is the electric sauna, which typically uses an electric sauna stove to heat up stones or rocks that are able to retain heat.

An electric sauna, or rather, the stove, can be activated by simply pressing a button. In other words, there is no need to burn wood. Water can be splashed onto the rocks to create steam for more heat.

Electric saunas today can be found everywhere, such as in gyms and spas, but they can also easily be installed at home.

One significant advantage of electric saunas over wood burning or smoke saunas is that it’s relatively easy to control the temperature inside the sauna.

A wood burning sauna, or wood stove sauna, works similar to an electric sauna, but has a more traditional setup.

A metal stove, or kiuas in Finnish language, with sauna stones on top is used to burn wood which in turn heats up the stones.

The stones, or rocks, are then able to spread heat into the sauna room. Water can then be used to occasionally splash onto the rocks to create a steam effect, also referred to as löyly in Finnish language.

Wood burning saunas are less common than electric saunas for obvious reasons, but I personally find the experience a bit more authentic.

The typical temperature range in a traditional sauna, either wood burned or electric, is 150 to 190 degrees Fahrenheit (66 to 88 degrees Celsius).

A smoke sauna is the oldest and most traditional type of a Finnish sauna, and today we don’t see them very often anymore. They mainly exist in Northern European countries, such as Finland, Lithuania, Estonia, and Latvia, and also in Russia.

Also referred to as savusauna or savu sauna in Finnish language, a smoke sauna is similar to a wood burning sauna with the key difference being that there is no chimney pipe.

Wood is being burned in a stove, and the resulting smoke enters the room as there is no pipe that can let the smoke out. Once the sauna reaches the desired temperature, the fire is put out, and the room is then ventilated.

The sauna is designed such that it is able to retain heat for quite some time after the fire is put out for sauna users to enjoy their session.

Smoke saunas typically exist outside in the form of a cabin, and are relatively easy to design and build. The heating process, however, can often take a long time, with anywhere between 6 and 8 hours being standard.

A newer type of sauna is the infrared sauna which, as the name suggests, uses infrared waves as a way to heat up the body.

These waves emit infrared energy, which is on a similar wavelength to the energy which the human body naturally emits, approximately 7 to 14 microns.

Infrared targets the body rather than warming up an entire room. As a result, the average temperature in an infrared sauna is typically much lower than in a traditional sauna with a stove.

Personally, I prefer using a traditional sauna rather than an infrared sauna, as the experience is quite different. But sweating you will do in both types of saunas.

The typical temperature range in an infrared sauna is 80 to 130 degrees Fahrenheit (26 to 55 degrees Celsius).

A steam sauna, otherwise called a steam room, is a type of sauna that heats up by creating steam that is emitted into the room at regular intervals. Steam saunas are popular in gyms, but they are also used in Turkish hammams, for example.

Steam rooms are typically heated by a steam generator that boils water, turning it into steam, and continually releases it into the room.

This creates a humidity level in the room that is much higher (up to 100%) than in a traditional sauna.

Interestingly enough, the temperature is typically lower in a steam sauna, but the high humidity makes it feel much warmer. As such, most people can’t stay in a steam sauna as long as in a traditional sauna.

Steam rooms are usually much easier to clean because they are made of tiles, glass, and plastic, as these materials do not absorb moisture as much as wood does. Regular cleaning is necessary, though, because the humidity makes steam rooms more vulnerable to mold development.

Read my guide to the differences between saunas and steam rooms for a complete outline of these two types of saunas.

The typical temperature range in a steam sauna is 90 to 120 degrees Fahrenheit (32 to 50 degrees Celsius).

As the name suggests, a steam shower sauna is essentially a combination of a steam room and a sauna.

It’s not a type of sauna as such, but it’s worth including in this list as they are quite popular. A steam shower sauna is typically a unit that you can purchase and install at home.

It’s essentially a steam sauna added to a shower area, suitable for those who don’t want or need a bulky electric sauna in their house.

Another type of sauna that you can use at home, and one that is cheaper than the above steam shower sauna, is a portable sauna. You can get one for as little as $200, and it can be used straight away.

All you need to do is place yourself inside the unit, turn on the steamer, and start your session. A chair is often included for extra comfort. Note that they also come in an infrared version, if that’s what you prefer.

They may look a bit weird, but if you’re not in a position to install a more expensive sauna in your home, or if there are no sauna facilities close to where you live, a portable steam sauna might be worth trying.

But portable saunas come in various shapes and sizes beyond the tent models. You can also get a portable sauna in the shape of a dome or in the form of a blanket.

Sauna Samurai is your online guide to the beautiful world of saunas and steam rooms. Discover the goodness of the sauna lifestyle.